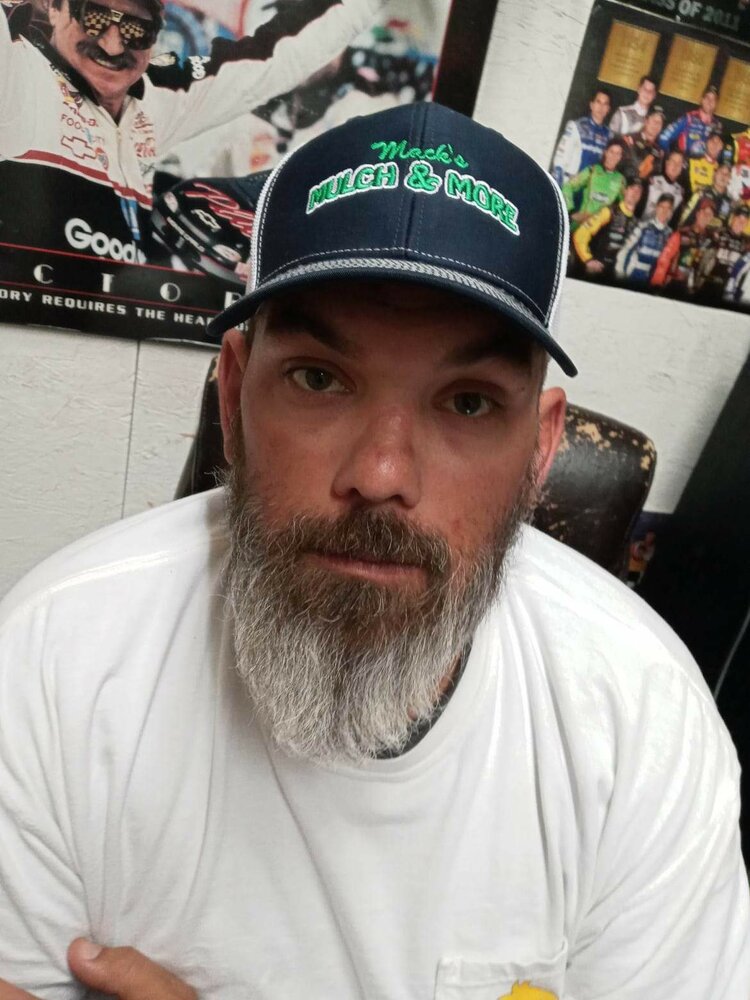 Please share a memory of Corey to include in a keepsake book for family and friends.
View Tribute Book
Corey Joseph Floyd was the youngest son of the late Bill and Sandy (Bailie) Floyd. He was born on December 18, 1981, in Columbia, MO, weighing only 3lbs and fighting all the way. On August 28, 2004, he married Tina “Marie” Sullins. They were blessed with 3 sons, Leon, Skyleer, and Eli and a granddaughter, Emme, who he loved with all his heart. Corey passed away with his family surrounding him at his home on December 3, 2022. In June of 1995 on the last night of church camp at Rock Garden Corey got saved and Mr. Rick Mosher baptized him at the Licking Christian Church, also the same day Amber (Kuhn) Stephens was baptized. Corey got his love for old cars from his dad, and he enjoyed finding and collecting junk like his mom. He was raised up on all kinds of music and boy could he dance. When Corey moved to Branson, he worked for an excavating crew for about seven years before returning home to help take care of his dad. He loved taking his boys and Marie to the races in Rogersville and to the lake when they lived in Branson. Corey loved hanging out with his buddies. There sure were a lot of them. They would go camping, talk cars, and just have a great time around a campfire telling stories or a good joke. When he could go, Corey loved the annual camping trips. Corey was a shoe man from the time he was little until he passed. He would say “The first thing I ever notice about a person is their shoes.” The cooler, the better. He loved to cook and have big family dinners and his specialty was smoking meats for everyone to enjoy. Corey had a hell of a sense of humor. Corey had a love for animals. Once as a youngster he saved a cat out of a pool and brought it home and his dad let him keep her. He had a beagle dog named Jed. Once Corey came up missing and guess where he was, asleep with Jed in the doghouse. He always wanted a Frenchie and loved watching videos of them. He like YouTube, Tiko, and 5-minute hack videos. Corey loved reading the Licking News every week and picking up a Horse Trader so he could see if he could find a good buy on a car or truck. Corey is survived by his wife, Tina and sons, Skyleer and Eli, all of the home; brother, Shane Floyd and nephew, Michael; sister and brother-in-law, Haley and Bill Joyner and nieces, Bailie (Nate) Case, Krysta Joyner, and Katie Joyner; brother and sister-in-law, Billy and Rhonda Sullins and nephew Austin; father-in-law, Benny Joe (Carla) Sullins; mother-in-law, Sharon Davy; aunts and uncles, Bill and Lavern Landwehr, Kay Cockcroft, Dennis and Judy Bailie, Shirley and Marvin Umfleet, Larry and Myrna VanDeusen, Opal Beasley, Bobbie Krewson, Carole Bailie, Valeria and Roni; cousins, Lori and Grant Heithold, Cynthia Floyd, Stan and Tammy Taylor, Nikkie, Darin, Sharon, Jana, Beth, Tim, DeeDee, Tony, Sheri, Stan, Steve, Debbie, Tracy, Tonya, and Kerry. Corey was preceded in death by his son Marine LCPL Leon Donelson; parents, Bill and Sandy Floyd; grandparents, Dolph Floyd, Maxine Landwehr, Roy and Thelma Bailie; aunts, uncles, and cousins, Bob and Diane Floyd, Lisa, Danny, Erin Floyd, Chuck Floyd, Leon Bailey, and Lloyd Beasley.
To plant a beautiful memorial tree in memory of Corey Floyd, please visit our Tree Store
Sunday
11
December

Look inside to read what others have shared
Family and friends are coming together online to create a special keepsake. Every memory left on the online obituary will be automatically included in this book.
View Tribute Book
Share Your Memory of
Corey
Upload Your Memory View All Memories
Be the first to upload a memory!
Share A Memory
Plant a Tree