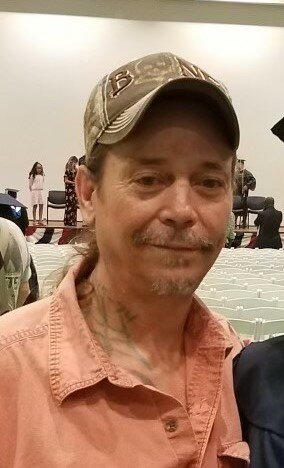 Please share a memory of Russ to include in a keepsake book for family and friends.
View Tribute Book
Russell Ambus Sisco II, age 48, son of Marvin and Nancy Sisco, was born on February 15, 1974, in Columbia, MO. He passed away on August 24, 2022, in Columbia, MO at University Hospital. Russ is preceded in death by his parents, Marvin and Nancy Sisco; and birth father, Russell A. Sisco I. He is survived by one daughter, Shania Sisco; two sons, Marvin and Cheyenne Sisco; two nieces, Ashley and Kayla ReVelle; birth mother, Debra King; sister, Tina Rae Sisco; half-sister, Amelia Sisco; half-brother, Randy Sisco; stepmother, Pat Sisco; three grandchildren, three great nieces, and two great nephews. Russell grew up around Licking and attended Licking High School. Russ loved hunting, fishing, breaking horses, and riding horses. He was also known for cutting firewood with his sister, Tina, and logs with his birth father, Russell. Russell was very interested in his Native American belief. He believed that he would later return to his role of a wolf. Based on a general, animal symbolism this was of great significance for all tribes, but wolves were symbols of mythical powers. People believed that wearing the skin of a wolf would turn them into half human, half wolf. Several tribes believed that the Creator of the World was a wolf. The first nations worshiped "Sirus," the wolf star. They also believed that the wolf star would always lead the tribe home in time of need or the time of a hunt. Before setting out on a hunt, the tribes would perform rituals to invoke the wolves strength. Russell also believed the Christian beliefs. Russell enjoyed quality time with his two nieces, Ashley and Kayla, and great nieces McKinley and Kimmy of Licking. Russell was looking forward to returning home to Licking with his sister, Tina, to spend the remainder of his life fishing, four wheeling, boating, and hunting. He was also looking forward to meeting his three grandchildren and spending time with his children, Shania, Marvin, and Cheyenne, of Arkansas. Russ will be greatly missed by all who knew and loved him.
To plant a beautiful memorial tree in memory of Russ Sisco II, please visit our Tree Store
Monday
29
August

Look inside to read what others have shared
Family and friends are coming together online to create a special keepsake. Every memory left on the online obituary will be automatically included in this book.
View Tribute Book
Share Your Memory of
Russ
Upload Your Memory View All Memories
Be the first to upload a memory!
Share A Memory
Plant a Tree