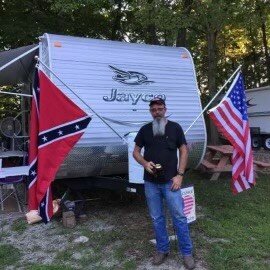 Please share a memory of Randy to include in a keepsake book for family and friends.
View Tribute Book
Randy Lee Burke was born June 22, 1965, in Columbia, MO to James Harvey Burke and Dorene May Gibbs. His health cut his life short at the age of 56 years young on December 18, 2021, in Columbia, MO. Randy married the love of his life and high school sweetheart, Brenda, on September 1, 1995, and they were blessed with two beautiful girls; Heather Renee and Kimberly Ann. Randy never met a stranger and lived life to the fullest. He enjoyed hunting, camping, fishing, and spending time with family and friends. Randy’s occupations over the years gained him many friendships he cherished. Randy enjoyed rooster cruisin around the US with all of his buddies. Some of his biggest accomplishments were being a husband, father to two beautiful girls, and a pappy to his five grandchildren and two great grandchildren. The last months he enjoyed being outside drinking coffee and watching his dogs, Duke and Jez. He enjoyed keeping up with current events by watching the news. He also enjoyed keeping in contact with all of his buddies on the phone. Randy accepted Jesus Christ as his Lord and Savior in 2017. Randy is survived by his loving wife Brenda of 37 years; two daughters, Heather and Kimberly (and husband Heath Coyne); mother, Dorene Gilmore; five grandchildren, Evan, Jake, Cortney, Airlie, and Ashlynn; two great grandchildren, Addison and Wyatt; three sisters, two brothers, three sisters in law, two brothers in law; and long-time friend, Unc Elmer Hayes. He will be greatly missed by all who knew and loved him. “Randy Lee Burke was born on June 22, 1965 and what entertained him was Duke/Jezzie/and Airlie/and the news and he yoost to drink beer/and we love him so so much much.” Written by his granddaughter, Airlie Lyons.
To plant a beautiful memorial tree in memory of Randy Burke, please visit our Tree Store
Wednesday
22
December

Look inside to read what others have shared
Family and friends are coming together online to create a special keepsake. Every memory left on the online obituary will be automatically included in this book.
View Tribute Book
Share Your Memory of
Randy
Upload Your Memory View All Memories
Be the first to upload a memory!
Share A Memory
Plant a Tree