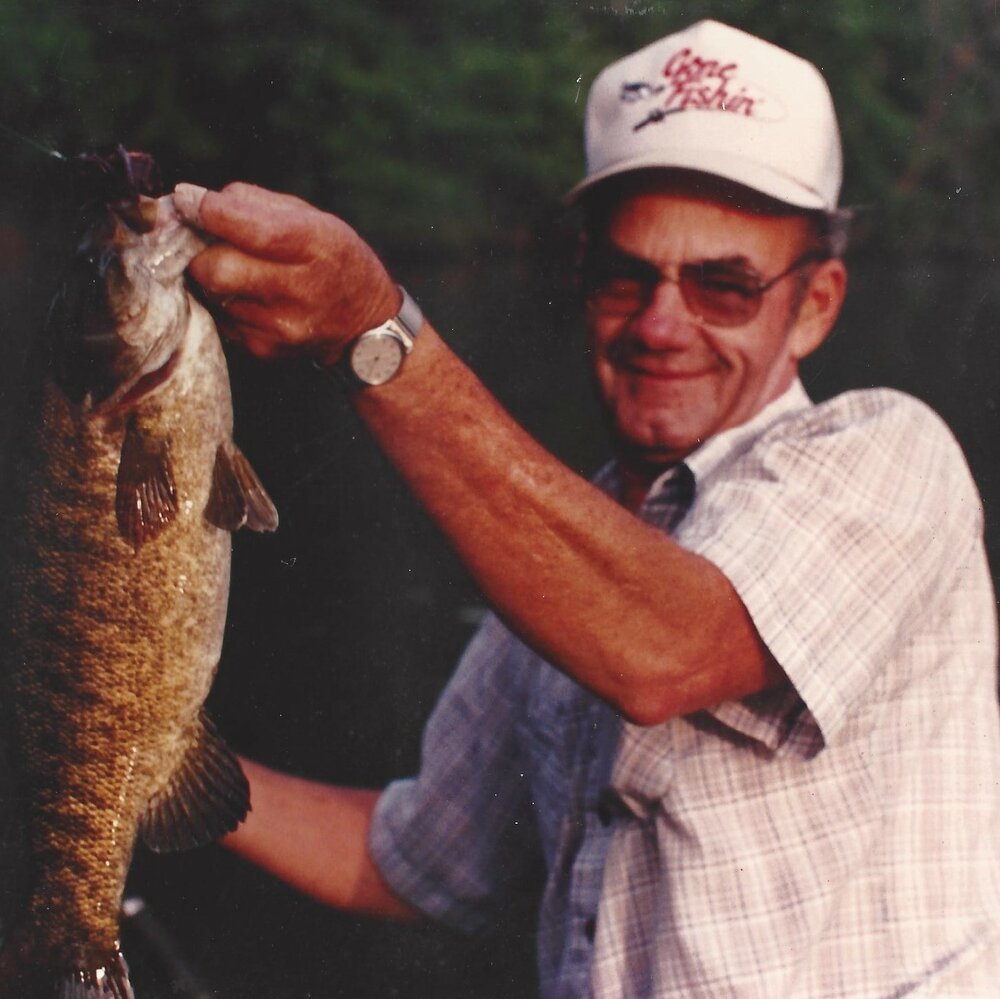 Please share a memory of Arthur to include in a keepsake book for family and friends.
View Tribute Book
Arthur Lee Wade was born May 24, 1940 to the late Charles and Cora Wade in Bloodland, MO (Present-Day, Fort Leonard Wood). He went to be with the Lord on November 7, 2021 in the company of his family. He is preceded in death by his wife Glenda Fay, his parents Charles and Cora Wade, and sisters Eula Matlock, Florene Cassidy, and Dot Cooper. Art, dad, daddy, grandpa, papa, “Charlie Brown” and “old man,” are the names that have been used to represent him over the years. While he is known for his fishing skills and technique, many would be surprised to find out that he was only nine years old when he started guiding. His resume mainly focuses on truck driving, the sawmill, and logging but we all know that his most important job was serving as grandma’s chauffer and bingo partner. Most of the time, Art could be found sitting outside on the back porch smoking a cigarette or sipping his coffee, planning his next guide, or asking anyone he crossed paths with how Piney River was looking that day. He was a man of few words, but the words spoken meant something special to those who loved him the most. One thing his grandchildren will never forget were the Christmas celebrations in the Wade household, but before the presents were stacked from floor to ceiling, Art and Fay had their hands full with their original seven. In order to make the holidays a little brighter, Art, with the help of his boys, picked up side jobs including trapping & picking up walnuts, pinecones & dogwood berries. Grandpa Wade also continued the side-job tradition with his grandkids. While the jobs might have looked a little different over the years, they were all of equal importance in teaching the value of hard work. Art’s legacy lives on through his teachings and love of family, both on and off the river. We can all find comfort in knowing that he is now with his bride and we will one day see them again. Art is survived by his seven children, three daughters including Tina Wade, Belinda Ethridge of the home, Summer Ritchie and husband Scott; four sons including Frank Wade, Terry Wade and Miss Jayna, Jeff Wade and wife Kim, Luke Wade and wife Amanda; three brothers including Richard Wade and Patsy, Paul Wade and wife Debbie, Dean Wade and wife Judy; one sister Sue Crews; 21 grandchildren including Michael Layton and wife Lisa, Daniel Layton, Tasha Kinder and husband Lance, Kelsey Johnson and husband Alex, Shelby Wade, Tyler Wade and wife Livy, Megan Booker and husband Andrew, Kyle Adey, Kent Adey, Chezney Adey, Lane Wade, Austin Wade, Hayden Wade, Lake Wade, Chance Ritchie, Grant Casey; and 25 great grandchildren including Makenzie, Gracie, Kylee, Emily, Lexi, Landon, Miley, Kobyn, Dawsynn, Kavyn, Michael Glen, Keegyn, Grayson, Jacoby, Knoxyn, Harper, Hattie, Thayer, Amador, Henry, Brinley, Gweneth, Everly, Rosie, and Kyvree.
To plant a beautiful memorial tree in memory of Arthur Wade, please visit our Tree Store
Tuesday
9
November

Look inside to read what others have shared
Family and friends are coming together online to create a special keepsake. Every memory left on the online obituary will be automatically included in this book.
View Tribute Book
Share Your Memory of
Arthur
Upload Your Memory View All Memories
Be the first to upload a memory!
Share A Memory
Plant a Tree