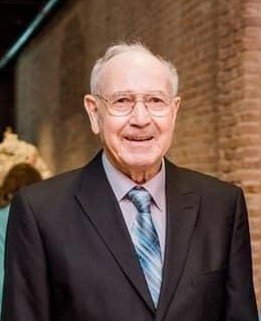 Please share a memory of Donald to include in a keepsake book for family and friends.
View Tribute Book
Donald Vernon Chambers was born March 21, 1934 in Sherrill, Missouri to Frederick Percy Chambers and Elizabeth (Curly) Chambers. He passed away peacefully with his loving family at his side at University Hospital in Columbia, Missouri on April 7, 2021. Donald married the love of his life, Lenora Belle Hadley on March 26, 1955 and she survives in the home. He is also survived by one sister, Patsy Fluehr of St. Louis, MO. Don and Lenora were proud of their four sons, Keith and wife Julie Chambers of Licking, MO; Kevin and wife Krista Chambers of Rolla, MO; Barry and wife Jean Chambers of Columbia, MO and Brian Chambers of Rolla, MO. They have 12 wonderful grand kids and 8 sweet great grand kids and many more family members and friends. Don was proud of his family and loved every one of them dearly. His main occupation was a carpenter. His hobbies included spending time with his wife and family, gardening, reading westerns such as Zane Grey and Louis L'Amour. He was a man of faith and his kindness, unconditional love, integrity, and passion for his family is immeasurable. He instilled wonderful family love and traditions in his family and was their idol. He always greeted you with a big smile or hug and never wanted you to leave. He is already so missed and his legacy will live on forever from all seeds of kindness and love that he sowed during his time here on earth. It is not goodbye, but until we see you again. Donald was preceded in death by his infant daughter, Lori Dawn Chambers; his parents Frederick and Elizabeth (Curly) Chambers; brother Dale M. Chambers; sister, Fern S. Chambers Warnecke; sister Helen E. Chambers Miller; brother Gerald Lloyd Chambers; sister Cleo G. Chambers; brother Harry Eugene Chambers; and brother Glen Dean Chambers. Pallbearers will be Scott Chambers, Michael Chambers, Kaleb Chambers, Tyler Chambers, Carson Chambers and Steve Miller. Honorary Pallbearers will be Corey McComas, Jacob Hayden, Doug Tiefenthaler, Jake Fester, Garrett Fester, and David Chambers. Visitation will be held at Fox Chapel on Sunday, April 11, 2021 from 2 - 4 PM and service will be held at Fox Chapel on Monday, April 12, 2021 at 10 AM with Mr. Rick Mosher officiating. Internment will be held in Craddock Cemetery in Licking, MO following. Online Condolences may be made at www.foxfh.net. In lieu of flowers, memorial contributions can be made to Craddock Cemetery. All arrangements are under the direction of Fox Funeral Home.
To plant a beautiful memorial tree in memory of Donald Chambers, please visit our Tree Store
Sunday
11
April