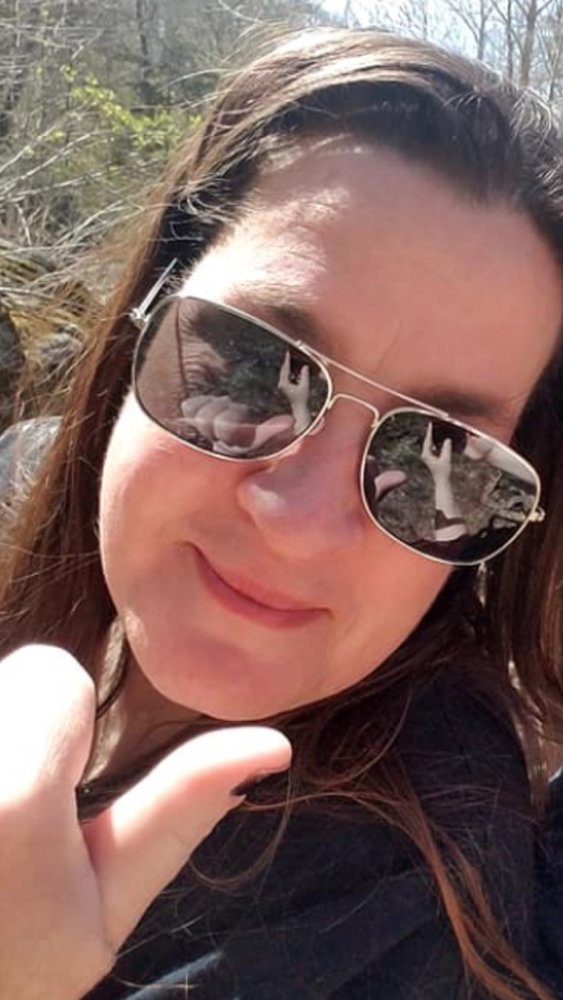 Nikk was born on January 25, 1975 and passed away peacefully in St Louis, MO on March 9, 2019. Nikk fought a hard, unexpected battle with her health but her battle is over and she is home with our Lord who had a very special place waiting for her.
Nikk, oh goodness! Where do we start? She was the biggest goofball, the smart alleck (well all of us have a bit of that in us), the funny one, the one always smiling and laughing, the bodyguard, the animal and nature lover, just one of a kind for sure. God did dang near perfect making her. Nikk had a heart of gold. As soon as you met Nikk you immediately felt like and were treated like family. She is already dearly missed by all who knew her. She was good people.
Nikk enjoyed the outdoors and going to the local creeks and rivers with family and friends and skipping rocks or collecting them while there for her nature shelf (that nobody was allowed to touch). She also enjoyed skateboarding, “sweet bike tricks”, playing drums, snowboarding, riding dirt bikes, listening to music of all kinds including gospel, talking for hours on the phone to her close friends from back home, she loved cooking late at night, making a mess was also a favorite past time, setting off fireworks, building bonfires, fire of any kind caught her attention. She was pretty much up for anything outdoors as long as her loved ones were around her. She loved to bend the rules a tad bit too much at times (like her mother) but always with good reason and intent.
Nikk is survived by her loving daughter, her very best friend in this whole world, Chezni Rocha (19), who feels the exact same about her mam. She always wanted to be around Chezni and Chezni was so amazingly loyal and stood by her mam's side until God took her to heaven. Also, Nikk is survived by Danny Domokos, Chezni’s fiance, and already considered him her son. Nikk is survived by a little guy she referred to as “My son”, Austin Lancaster (Austin Boston). This was her five-year-old little adhd best buddy who she was able to keep up with. Austin didn’t have rules at Nikk’s. Her “son” could do whatever he wanted at Nikk’s house.
Nikk is also survived by her sister, Lindsay Hodson, of Licking, MO, another best bud of hers, who she adored, some days loathed as sisters will always have the yin and the yang. They always had each other’s backs and stuck together through some rough times. There was definitely an unbreakable bond between the two.  There is also the family pup, Ruka. Nikk loved hanging out with Ruka, breaking all the rules and sending her back home.
Nikk also is survived by a brother, Jeffrey Timm, of San Bernardino, CA. and her father, David Hodson, of Licking MO.
She was preceded in death by her mother, Joann Hodson also her grandparents, Robert and Mabel Looy, of CA.
Nikk will be missed by all who knew and loved her. There are just too many to name individually.
A memorial service will be held April 6, 2019 at 3 pm at Boiling Springs Resort. Please bring a chair, blanket, or cop a squat as we will only have a limited number of chairs to provide. In lieu of flowers, the family has requested donations to Fox Funeral Home to help with payment of funeral arrangements. Memorial contributions may be made at Fox Funeral Home or on their website, www.foxfh.net.

To send flowers to the family or plant a tree in memory of Nacomi Hodson, please visit Tribute Store
Saturday
6
April