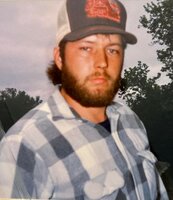 Robin Hamby, 62, of Edgar Springs, passed peacefully on June 12, 2022, a beautiful Sunday morning, Born to Otha “Oach” and Della (Mansfield) Hamby of Edgar Springs on August 19, 1959, and was their last surviving child. He was preceded in death by his parents, sister Barbara Hamby, and brother Ronald Hamby. Growing up, Robin was a talented athlete and baseball player, who loved to fish and hunt. After graduating from Rolla High School, Robin joined the U.S. Army Reserves in 1978, where he attained the rank of Sgt. before leaving the service in 1984. Robin could always be found with a cup of strong black coffee, listening to music, and having a cigarette. He loved both his family and animals deeply. Over the years he raised many dogs and cared for stray cats. As such, in lieu of flowers, memorial contributions can be made to local animal shelters. Robin is survived by his daughter Whitney Erin (Hamby) Webb and husband James of Rolla, and Granddaughter Madeleine Grace Webb; uncles Leroy Mansfield and wife Dorothy of Licking, Dale Mansfield and wife Carol of Florida, Harold Mansfield and wife Bonnie of St. Louis, and Ferral Mansfield and wife Patsy of Flat, MO, and a slew of cousins, nieces and nephews. A funeral service for Robin will be held at 2 pm on Monday, 20 June 2022, at Fox Funeral Home in Licking. A visitation will be held for friends and family one hour prior to the service. He will be laid to rest next to his parents, grandparents, and sister at Ozark Memorial Gardens in Rolla, MO following the service.