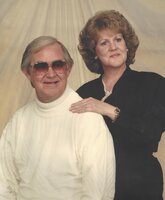 Robert Donald Lee Hockman “Don” was born January 25, 1932 in Wichita, Kansas. Don passed away on March 3, 2022 in Houston, Missouri. Preceding him in death are his parents, Ople and Laura (Craig) Hockman; and two brothers, James Laroy Hockman and Richard Hockman. Don is survived by his loving wife of thirty-two years, Allison Hockman. Don and Allison were married on July 7th, 1988 in Eureka Springs, Arkansas. Don was proud to serve in the U.S. Navy. He also obtained his bachelor’s degree in engineering from the University of Oklahoma. Per Don’s wishes, cremation is taking place. God’s Garden God looked around his garden and he found an empty place. He put his arms around you and lifted you to rest. God’s garden must be beautiful, he always takes the best. He knew you were suffering; he knew you were in pain. He knew that you would get well on earth again. He saw the road was getting rough, and the hills were hard to climb. So he closed your weary eyelids, And whispered, “Peace he thine.” It broke my heart to lose you, but you didn’t go alone. For part of me went with you, the day God called you home.