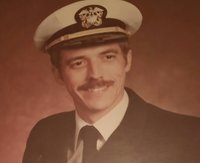 George Michael Horne “Mike”, 74, of Licking, MO passed away on April 26, 2021 at the Missouri Veterans Home in St. James, MO. Mike was born on August 23, 1946 in York, PA, the son of Harold and Ruthilee Horne. Mike retired from the United States Navy as a Lieutenant Commander after 20 years as a Naval Officer. He enjoyed sailing, woodworking, classic corvettes, airplanes and flight, sail-making, and canvas work. His grandchildren were his joy. Mike is survived by his wife, Maryan Horne; daughter, Rebecca Shaw; grandchildren, Christian and Sierra Shaw; and great grandson, Everett Auth. He is preceded in death by his son, Richard Barnes; and parents, Harold and Ruthilee Horn. Per his wishes, Mike was cremated. Private family services will be held in Maryland at a later date.